Flowers or Cake? How About Both! 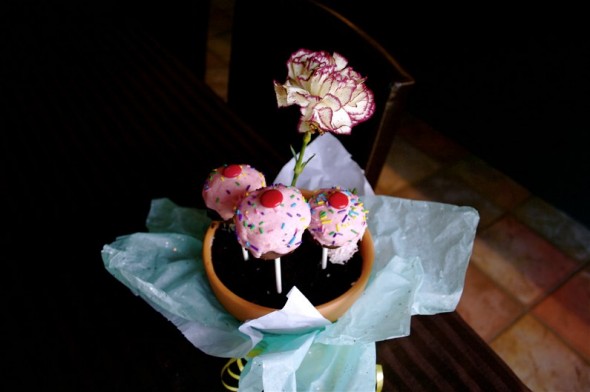 I wanted to share this with you guys because it’s super exciting for me- my first paid job! I had a friend approach me needing something as a special surprise for his girlfriend of two years (what a nice bf!). The only problem was that she ‘only likes boring vanilla cupcakes with boring vanilla icing’. He wondered if I had any ideas on how to spice this up. After some thinking, I decided to put a special twist on Pioneer Woman’s ice cream flower pot, and Bakerella’s cupcake pops.

I made a large vanilla bean cake and cut it into rings to fit inside the flower pot. I made a vanilla bean simple syrup and brushed it onto each ring of cake, to add extra vanilla flavour and moistness. I made a vanilla bean buttercream to fill the flower pot between each ring of cake, and then topped it with Oreo cookie crumb ‘dirt’. I used one real flower in the display, encased by a straw to keep the stem from touching the cake. I made 3 cupcake pops using the same vanilla bean cake and icing mixed together and formed into miniature cupcakes, and then dipped them in milk chocolate and coloured white chocolate melts. With some colourful sprinkles and a red Smartie, these look like the real thing! Resting on the Oreo ‘dirt’ were two chocolate covered strawberries rolled in coconut- one in pink chocolate, and one in milk chocolate.

I was super stressed out and anxious to see how the couple would like this, and it turned out that they really enjoyed it! I was so happy to do this for them 🙂 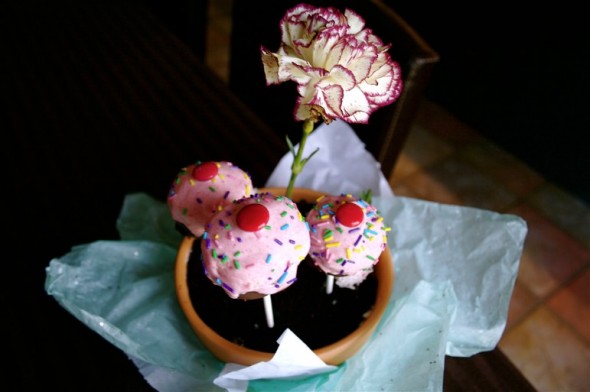